New Century Resources is continuing its march towards becoming a Top 10 global producer, with a seven per cent lift in zinc production last quarter.

Focus for the latter part of 2019 was on commissioning and stabilisation of the upgraded scavenger circuit within the processing plant at the company’s Century zinc operation in the lower Gulf region.

The upgrade work was completed in late October, with the slurry commissioning process taking about six weeks before stability of operations resumed.

The December 2019 quarter average mining rate was 8.3Mtpa, with progressive ramp up during the quarter for a current mining rate of 8.9Mtpa into January 2020, according to an operational update released to the ASX.

It produced 28,000 tonnes of zinc metal in the quarter, including 10,000 tonnes in December alone.

New Century says the Century site’s expansion to a 12Mtpa operation will be proceeding as planned in the first half of 2020.

Expansion capital expenditure is about 73 per cent complete, with about $13 million remaining to be spent this financial year. 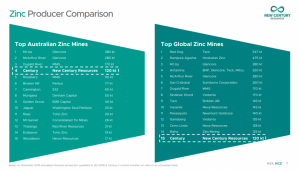 Gas to flow to industry on 2021 from Chinchilla project (IQ)

We look forward to working with you.

For more information on our services, please fill out the form and one of our team members will be in touch.

About Us
News
ISO Certified